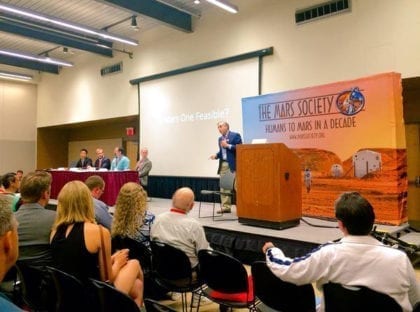 The Mars Society will convene its 19th Annual International Mars Society Convention on the beautiful tree-lined campus of the Catholic University of America in Washington, D.C. from September 22 – 25, 2016. The main convention events will take place in the Edward J. Pryzbyla University Center.

The four-day conference will bring together leading scientists, engineers, policymakers, government officials, entrepreneurs and journalists to address the significance of the latest scientific discoveries, technological advances and political-economic developments that could open the way to the human exploration and settlement of the Red Planet.

Convention highlights will include a series of public debates on key issues and challenges facing Mars exploration and the future of the U.S. space program, as well as the final face-off of university student teams presenting designs for the Mars Society’s International Gemini Mars competition.

Additional details, including scheduled keynote speakers, will be posted on the Mars Society web site (marssociety.org) in the coming weeks. Please save the date and join us next September in Washington, D.C., just weeks prior to the 2016 U.S. presidential election!

The Mars Society invites presentations for the 19th Annual International Mars Society Convention. Subjects for discussion can involve all matters associated with the human exploration and settlement of the planet Mars, including science, technology, engineering, politics, economics, public policy, international relations, to name a few.