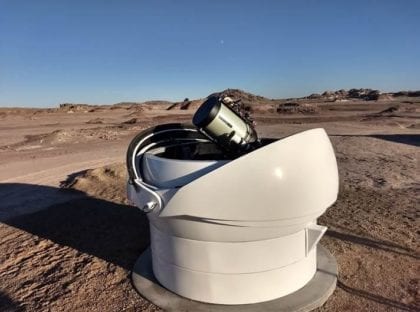 There is a new star rising at the Mars Desert Research Station (MDRS) that allows crew and professional astronomers, as well as college and high school students, the ability to incorporate cutting edge technology to explore the wonders of the universe.

The MDRS Robotic Observatory works in a similar manner as today’s modern facilities, and indeed as an observatory would work on the Red Planet someday in the future.  No one physically looks through the telescope and no one enters the observatory.  In addition, astronomers are not required to stay up all night collecting data.  Instead they program what celestial observations they want to achieve (target, filter, and exposure) sometime during the day.  On a clear night the dome opens automatically and begins the sequence of taking the night’s images when those objects are best positioned in the sky.  The images are then downloaded onto the observer’s computer, where the astronomer can retrieve and process the data the next day.

The MDRS Robotic Observatory uses software developed by the University of North Carolina at Chapel Hill called Skynet.  The MDRS facility is unique in the Skynet family because it consists of two telescopes. The smaller instrument, a 70mm Stellarvue refractor, is fitted with color filters and an extremely wide field designed for astro-photography. The larger instrument, a Celestron 14-inch, Schmidt-Cassegrain Edge HD, is fitted with photo-metric filters to perform professional quality research. Both telescopes use Moravian cameras and work off of a high precision 10 Micron, German equatorial mount. Edward Thomas from Deep Space Products was central in the selection and integration of the observatory’s instrumentation, including designing a small

computer to be used in extreme environments. The observatory’s Internet plan, spearheaded by Bernard Dubb, MDRS IT Coordinator, provides a hefty 20 gigabytes of data transfer per month allowing for a greater assurance of speed, resolution, and control of telescope functions.  Put it all together and The Mars Society has created a state-of-the-art observatory that can be used remotely by astronomy enthusiasts from around the world.

The MDRS Robotic Observatory became possible through the generosity of an anonymous donor and the astronomy program at Moravian College in Bethlehem, PA.  In addition, members of the MDRS Astronomy Team provided valuable assistance during the planning stages of the observatory and onsite help during its construction. Finally, this project would never have come to fruition without the support of Dr. Shannon Ruppert, Program Director of the Mars Desert Research Station, and Dr. Robert Zubrin, President of the Mars Society.  Additional information about the MDRS Observatories can be found at http://mdrs.marssociety.org/mdrs-observatories.