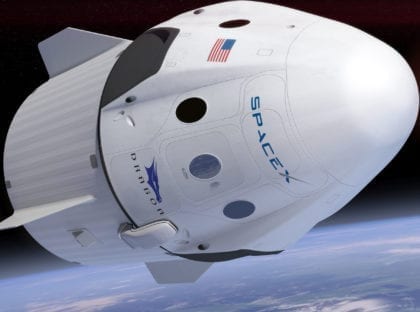 The following memo was sent by the author to NASA administrator Jim Bridenstine and Scott Pace, executive secretary of the National Space Council, on June 30, 2020.

A mission equivalent to Apollo 8—call it “Artemis 8”—could be done, potentially as soon as this year, using Dragon, Falcon Heavy, and Falcon 9.

The basic plan is to launch a crew to low Earth orbit in Dragon using a Falcon 9. Then launch a Falcon Heavy, and rendezvous in LEO with its upper stage, which will still contain plenty of propellant. The Falcon Heavy upper stage is then used to send the Dragon on Trans Lunar Injection (TLI), and potentially Lunar Orbit Capture (LOC) and Trans Earth Injection (TEI) as well.

There are two options for how to do it:

FH upper stage mass on reaching LEO = 75 tons = 10 ton dry mass + payload, with rest residual propellant. (This number results directly out of SpaceX data that its payload to LEO is 65 tons, and its payload to GTO is 26 tons.)

Falcon Heavy is launched without payload, resulting in LEO mass of the 10-ton dry stage and 65 tons propellant. After rendezvous and mate with Dragon, the assembled spacecraft has a dry mass of 19.5 tons and 65 tons of propellant. So mass ratio is 84.5/19.5 = 4.33. With the Falcon Heavy exhaust velocity of 3.41 km/s, this translates into a total ΔV capability of 5.0 kilometers per second. After 3.1 km/s used for TLI, this leaves 1.9 km/s for two 0.95 km/s ΔVs for LOC and TEI, enabling capture into a “lowish” lunar orbit and return to Earth.

The Falcon Heavy is launched with SPS as payload. The SPS includes 7.9 tons of LOX/CH4 propellant and 1.5 tons of dry mass. Together with Dragon, it has a total mass of 18.9 tons. With a mass ratio of 18.9/11 = 1.717 it has a total ΔV capability of 2 km/s, allowing it to do LOC and TEI going into and coming back from low lunar orbit. The Falcon Heavy upper stage reaches LEO with the 10-ton dry mass Falcon Heavy upper stage, 9.4 tons SPS mass, and 55.6 tons of propellant. After rendezvous and mate with Dragon, the assembled spacecraft will have a total mass of 84.5 tons, with 55.6 tons of that available in the FH upper stage to perform TLI (the remaining maneuvers will be done by the SPS).

The mass ratio of this assembly with respect to the TLI burn is 84.5/28.9 = 2.92. With the Falcon Heavy upper stage exhaust velocity of 3.41 km/s, this means that the Falcon Heavy upper stage will be able to executive a ΔV of 3.65 km/s, or 0.55 km/s more than the 3.1 km/s required. So, there is plenty of margin in this design, and in fact lower-performing propellants such as LOX/RP (348 s Isp) or NTO/MMH (320 s Isp) could be employed in the SPS and the mission would still be feasible as described, with the only penalty being a modest reduction in margin.

Travel to the Moon and back requires a minimum of six days, and the Dragon should be good for that. However, let’s say we want to add ten extra days to the Dragon’s endurance. A crew member uses one kilogram of oxygen per day. Thus, with a crew of two, ten days would require transporting an extra 20 kilograms of oxygen. If stored in gas cylinders at 3000 psi (as is done in SCUBA tanks), this would require a total volume of 0.075 cubic meters. The Dragon’s internal volume is 9.3 cubic meters, so that less than 1% of the available volume would be required to accommodate such tankage.

The Artemis program is advancing too slowly. As matters currently stand, it will have no visible accomplishments by the time of the election. Should administrations change, there is an excellent chance it will be cancelled. The Nixon Administration was not sympathetic to NASA’s plans for the human exploration of the Moon and Mars, and in fact cancelled NASA’s post-Apollo Moon base and Mars mission plans. But after Apollo 8, the only actual Moon mission done while LBJ was still president, it became unthinkable to abort the Apollo program short of landing. The best defense that Artemis will have in the event of a change of administrations is real tangible accomplishment: either actually done, or at least clearly imminent. Otherwise, it will be orphaned and likely go the way of Constellation and SEI. This must be prevented.

With Artemis 8, NASA can inspire the nation, restore our space program’s can-do spirit, and astonish the world with what free people can do. We should not miss this chance.

Dr. Robert Zubrin is founder of the Mars Society and president of Pioneer Astronautics.

Dr. Carol Stoker, a senior scientist at the NASA Ames Research Center and one of the co-founders of the Mars Society, will be giving a virtual talk about the ongoing search for life on Mars on Wednesday, January 12th at 7:00 pm CT during a chapter meeting of Mars Society Chicago. Dr. Stoker has been involved with Ames for 36 years, specializing in a range of Mars exploration science and technology. Most of her recent work has focused on developing… READ MORE >

NASA at Its Best [Zubrin Op-Ed]

By Dr. Robert Zubrin, National Review, 12.28.21 On Christmas Day, NASA’s long-awaited James Webb Space Telescope (JWST) was finally launched into space. The JWST is, by far, the greatest astronomical observatory ever built. Its primary mirror is 21 feet across, triple that of Hubble, giving it ten times the light-gathering capacity. Add to that the fact that its infrared optics are ten times as sensitive, and the result is a telescope a hundred times as powerful. The discoveries it could make are beyond reckoning…. READ MORE > 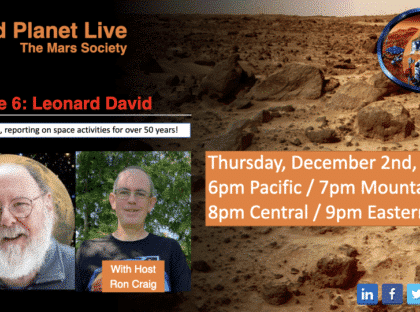 The Mars Society is glad to announce that veteran space journalist & author Leonard David will be joining host Ron Craig on our Red Planet Live (RPL) video podcast on Thursday, December 2nd at 6:00 pm PT / 9:00 pm ET for a wide-ranging talk about Mars exploration, a return to the Moon, the commercial space industry, and other space related topics.  Currently serving as Space.com’s Space Insider columnist, Leonard has been reporting on space activities for over 50 years, publishing articles in Scientific American, SpaceNews… READ MORE >