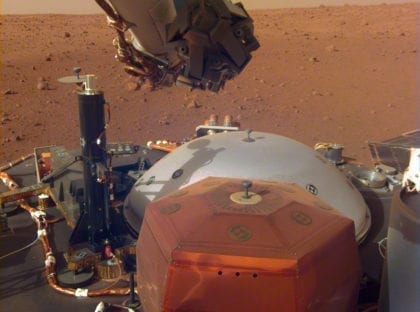 The Mars Society is pleased to announce that Tom Hoffman, JPL Project Manager of Mars InSight, will address the 22nd Annual International Mars Society Convention, scheduled for October 17-20 at the University of Southern California, to give an update about the lander’s ongoing mission.

Mars InSight successfully landed on the surface of the Red Planet in November 2018 in order to examine the deep interior of Mars with the goal of helping scientists better understand how terrestrial planets are formed and evolve. The lander’s operational mission is expected to last approximately two years.

A senior veteran at the Jet Propulsion Laboratory, Mr. Hoffman has been involved in a number of major flight projects, including working on software for the Voyager spacecraft’s encounter with Neptune, testing computer hardware for the Cassini mission to Saturn, participating in the STARDUST mission to the WILD-2 comet as a member of the project systems engineering team, contributing to the Mars rovers (Spirit and Opportunity) as Avionics Systems Manager and serving as Deputy Project Manager for the GRAIL mission to the Moon.

For more information about the 2019 International Mars Society Convention, including registration and volunteer details, please visit our web site (www.marssociety.org). A list of confirmed speakers and a tentative program itinerary will be posted online in the near future.

The Mars Society, led by Dr. Robert Zubrin, would like to take a moment to thank everyone who came to the 22nd Annual International Mars Society Convention in Los Angeles last week. With 350 (+) people attending the convention’s daily sessions, as well as the 300 who came to our sold-out Saturday evening banquet, this year’s international conference was one of the most successful to date. In addition, we would like to express our appreciation to all of the speakers… READ MORE >

The 22nd Annual International Mars Society Convention, scheduled for October 17-20 at the University of Southern California, will be broadcast via live webcast. This will include all major plenary talks, panel discussions and public debates over the course of the four-day conference in Los Angeles. Those unable to attend the international forum are kindly invited to watch any and all sessions at: http://webcast.marssociety.org. To view the conference’s program itinerary, please click here. For additional details about the Mars Society convention,… READ MORE >